The end of our treed neighbourhoods!

Seeing our world change before our eyes is not what we thought would ever happen but it is. Over the next year or two we will see a vast number of trees die in our neighbourhood as a result of the Shot Hole Borer Beetles referred to as PSHB. Here is our heartsore story.

Six shade trees down at Eckards and counting... we've just diagnosed the seventh and eighth.

What where and how? By now many have heard of the Shot Hole Border Beetle that is affecting the trees. South Africa is the largest infestation geographically in the world. Believed to be brought into the country in wooden pallets and spread throughout South Africa by the distribution of infected firewood. Now millions of trees are projected to die.

There are many articles online about what it is doing to our towns and cities so Google and be informed. The short version is that there is no known and or registered cure to save our trees. Infected trees need to be managed and removed responsibly and not sold off as firewood. At the moment Horticulturalists and Arborists are all trying to find solutions but as yet to no avail. Councils are all on the back foot as there will not be budget for tree removal and maintenance until it's probably too late but at the end of the day the council is responsible to find a solution.

Central Bedfordview and Elma Park are hot spots but it's safe to say our whole neighbourhood has affected trees. Even in Kensington trees are going down very quickly. It's hard to imagine what Dunvegan Avenue will look like without its trees down the middle island or how Bedfordview will look when the Pin Oaks go down in Van Buuren Road or when Oriel Park becomes just a lawned park with no trees but it is an eventual reality we will all have to face if we don't manage the situation. There are already roads in Kensington that have lost more than half their street trees.

What we do know. There are host trees and reproductive trees preferred by the PSHB and the list includes indigenous as well as exotic trees. Trees under stress and that are not healthy loose the battle sooner than trees that are looked after.

Do not buy or bring firewood into your property if you don't know the origin. When the small town in Parys got infected by someone taking firewood in from JHB people were alarmed. When you hear that around camp sites in the national parks, indigenous trees are affected from firewood taken in by campers we should be more than alarmed. When the Acacias and the Combretum in the parks go what will the Giraffe and the Elephants eat?

Importantly bear in mind when the tree feller operating from the side of the road cuts down an infected tree and throws it on the back of a bakkie and drives off... your yard may be responsible for all the beetles bouncing off the bakkie as it moves through the suburb and to its final destination where it rarely is disposed of correctly... or cut up into firewood and sold back into the neighbourhood neatly cut and stacked on the side of the road in bundles.

One can only despair and wonder where it will all end. We worry about our water that we drink if it's safe for us and make a plan if we're not sure. But as importantly we need air that is cleaner to breathe. There is an interesting article on “Streets without trees are dangerous” which reminds us that when we don't have street trees cleaning the city air we breathe the air quality goes down and a host of illnesses will follow.

For now we should all plant replacement trees with a few to spare as fast as we can for the next generation.

Knowing the facts is what is the most important. Here is the best online source we have found for information on PSHB link: https://polyphagous-shot-hole-borer.co.za/

Plant Of the Month 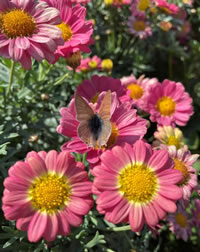 We have planted a lot of English Boxwood here at Eckards ...

Eckards is a member of: